We’re in week four of Utah’s legislative session and a lot happening. We had an important win yesterday when a concerning bill to limit incentives for renewable energy projects was held in committee. We also have our eye on several electric vehicle bills that are moving forward. Plus, for the first time that we know of, the Utah Legislature held a hearing about a national carbon pricing program. The list of bills we are watching continues to grow, so please take a moment to look over our legislative tracker for a roundup of everything. For now, below are the hot topics from week four of Utah’s 2022 Legislative session.

Sponsored by Rep. Kay Christofferson (R-Lehi), this legislation seeks to make significant reductions and eliminate key state tax credits for renewable energy.  Given the significant uncertainties in the market for solar panels and increases in material costs, this abrupt reduction in incentives is unwise at this time. The bill would also get rid of a range of other tax credits, including tax credits for the film industry. This bill was heard yesterday (Wed. Feb 9) in the House Revenue and Taxation Committee but thankfully was held and will not move forward this session!

This has been an interesting session with respect to climate issues. While the legislature is still not prioritizing climate or clean energy, there have been notable discussions on carbon pricing and carbon sequestration that we are keeping an eye on.

Representative Ray Ward (R-Bountiful) presented HJR 3-Joint Resolution Supporting Federal Carbon Fee and Dividend Program in the House Public Utilities, Energy, and Technology Committee last week. Representative Ward made a strong case for the Utah Legislature supporting a national carbon fee and dividend program that would put a price on greenhouse gas emissions and then refund the proceeds directly to households in the form of a monthly dividend. After significant opposition from the state’s electric utilities and the Utah Mining Association, the Committee voted 8-4 to hold the bill. We expect, however, that this may mark a strong turn to Republicans in Utah taking a second look at carbon pricing as a market-based tool to reduce emissions.

Sponsored by Representative Ray Ward (R-Bountiful), Senator Wayne Harper (R-Taylorsville), this bill relating to electric vehicle fees and the road usage charge program moved out of committee and was supported by a vote of 61-11 on the House floor. We are watching it closely to make sure that there are no further changes as it moves to the Senate. We expect it to be on the Senate Transportation, Public Utilities, Energy and Technology Committee this coming Monday.

Senator Wayne Harper’s (R-Taylorsville) legislation, SB 152 would prohibit homeowners’ associations and condominium associations from preventing residents from installing electric vehicle chargers in their own parking spaces at their residents or in a common area. It would also prohibit HOAs and COAs from banning rooftop solar arrays on roofs of multi-unit buildings, like a townhome, if the residents agree. We support this legislation. The bill passed the Senate Economic Development and Workforce Services Committee last Thursday and is on the second reading on the Senate floor. We also support a similar effort by Representative Joel Briscoe with part of his HB 189-Electric Vehicle Charging Modifications, which may be heard in House committee later this week.

Governor Cox requested $3 million in his FY23 budget for rural electric vehicle charging equipment through a program to be administered by the Office of Energy Development. We support this request, which was prioritized by the House Natural Resources, Agriculture, and Environmental Appropriations Subcommittee today (2/9). 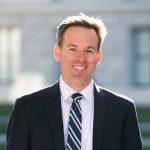 The Most Significant Climate Investment in US History

Following months of intense negotiations, the landmark climate, health care, and tax package called the “Inflation Reduction Act.” is nearing the finish line. And what a victory

The clean air and climate community was set on high alert last week when the U.S. Supreme Court limited the EPA’s ability to regulate carbon